Orange Hunt Elementary School has been the centerpiece of our community since its opening on September 30, 1974. The students who walked into the building that day had been going to Burke, Hunt Valley, and Keene Mill elementary schools.

The students walked into a school that had a new and experimental design: an “open classroom” school with no interior walls. It was painted bright colors on the inside of the four exterior walls and you could see from the front door to the back wall. 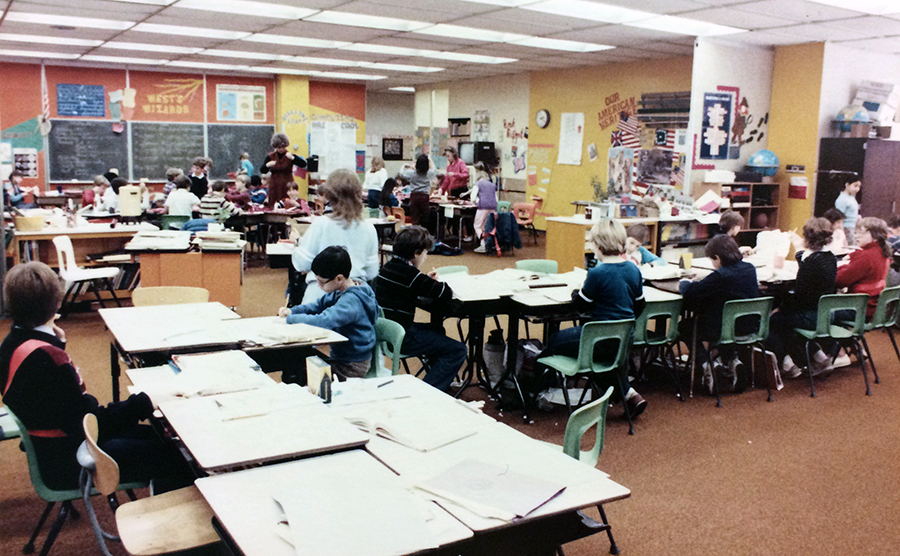 The open school environment at Orange Hunt allows flexibility to take care of individual student learning problems. It is a false assumption that an open school means chaos. Openness at this school is highly structured. Open schools like this are not just okay for some kids, they're okay for all kids. Students here have many options open, but they never have the option not to work.
~ Principal Ronald E. West

According to one of Orange Hunt's first teachers, Principal Ronald West put together a group of the best and the brightest teachers he could find. Four of them were at our school for over 25 years, a thread to the beginning of our school for those who followed. That thread has continued in many important ways in our community. The sense of family and concern for the world around us is a part of that thread. Those rooms without walls created a sense of community and collaboration between the teachers and the students. Orange Hunt is not about the building, but about the people who have spent eight hours or more a day in the building learning, teaching, and caring for themselves and others.

Bursting at the Seams

In 1983, Orange Hunt’s parents and community members joined together to build the most amazing playground children had ever seen. It was created by the community with many recycled parts and donations. Unfortunately time and Mother Nature worked against the wooden playground structures and it was replaced in 1995. Our playground has been a gathering place for the children of the community for a long time and it was updated again in 2013. In July 2013, the Fairfax County School Board officially named our new playground “The Dr. Judy Ryan Playground” in honor of Orange Hunt’s sixth principal.

In keeping with our school motto, our love has shown over the years in many ways. We adopted less fortunate schools and donated food, gifts, and clothing once a year. This program was run by the S.C.A. and the Guidance department. We have collected mittens, hats, jackets, eyeglasses, food, and money for those in need.

Our students have always watched out for each other as well; sometimes as reading buddies between upper and lower grades, sometimes as little sisters and brothers with an upper grade friend, and sometimes as real siblings waving in the halls. 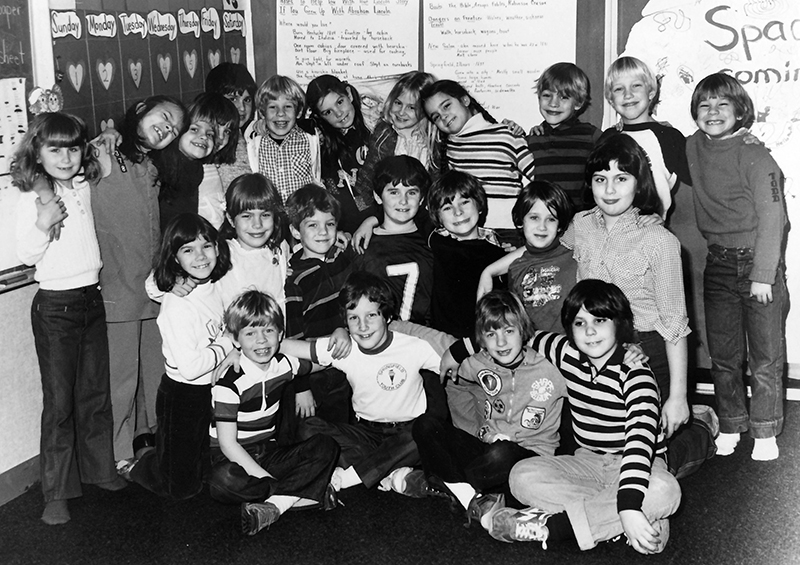 The Orange Hunt community grew when Sangster Elementary School opened in 1988. The new school boundaries brought many students from Hunt Valley Elementary School to Orange Hunt. Then principal, Pam Readyhough, threw a picnic in the spring of 1988 for the new students to welcome them to the school before they would arrive in the fall. The Spring Fling became a tradition for many years and has since morphed into the May Fest.

The new students joined the community wondering about the design of the school, which by now had some moveable walls and classrooms defined by wardrobes and bookcases. The spaces were still very open and accessible to each other, which continued to have positive effects, though it took some getting used to.

The next big change to Orange Hunt was the introduction of the German Immersion program in 1994. Then principal, Janet Trout Barbee, worked to integrate the new program into our school, to the benefit of the entire school community. German Immersion gave us a new identity as a language magnet school. It broadened our population because we accepted students from all over Fairfax County. One outcome was a very large Kiss-and-Ride at the beginning and end of every day. Our first German instructor was Frau Kessler. In May 1998, the American Association for the Teachers of German named Orange Hunt a "Center of Excellence." This honor coincided with a visit to Frau Kessler’s classroom by Juergen Chrobog, the German ambassador to the United States.

Some of you may know that President Clinton visited Germany recently. He spoke a few words of German, but nobody really understood him. People will understand you. I'm very proud and grateful that you have taken this initiative. Your German is so good -- better than my English! ~Ambassador Juergen Chrobog to Orange Hunt students

In 1995, our school had a total of 38 computers: 27 Apple 2Gs in the library and 11 in other locations in the building. Today, we have over 400 computers in our building with wireless network connections and printers. In addition, we have added technologies like SmartBoards that create a more interactive learning environment. Our students have the ability to use technology every day, keeping up with the world around them.

In 2001, construction began on an extensive building-wide renovation and renewal of our school.

In 2003, after the renovation was complete, we held a big party and rededicated the school. 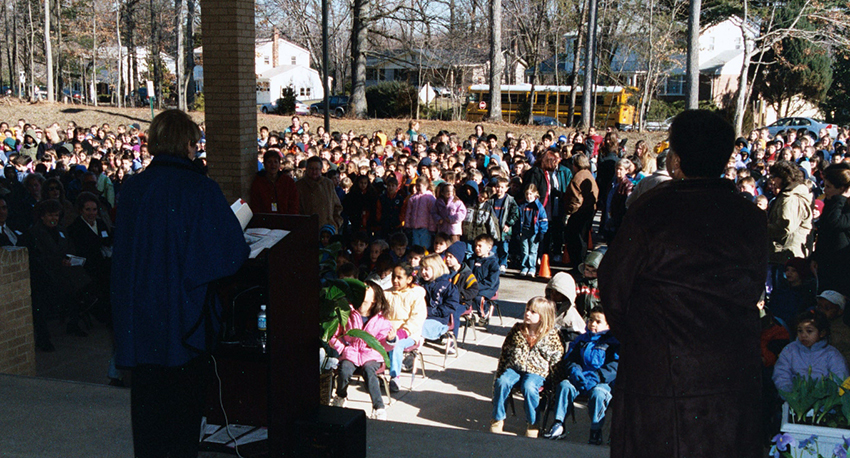 The true history of Orange Hunt is less about the building and more about the people. The Spring Fling / May Fest, the Fall Fest, P. E. Night, Math Night, and Art and Literacy nights have a long history in our school. Newer traditions such as the Veterans Day observance, begun under Principal Ryan, connect our students with the community and honor the veterans in our midst. Our students have learned to become leaders through S.C.A, safety patrols, peer mediators, and the news team.

Our students are aware of the world around them and work to make that world a better place. The lunch tray recycling campaign in our cafeteria was initiated by second graders. The compost heap in the butterfly garden helps recycle organic, snack waste. 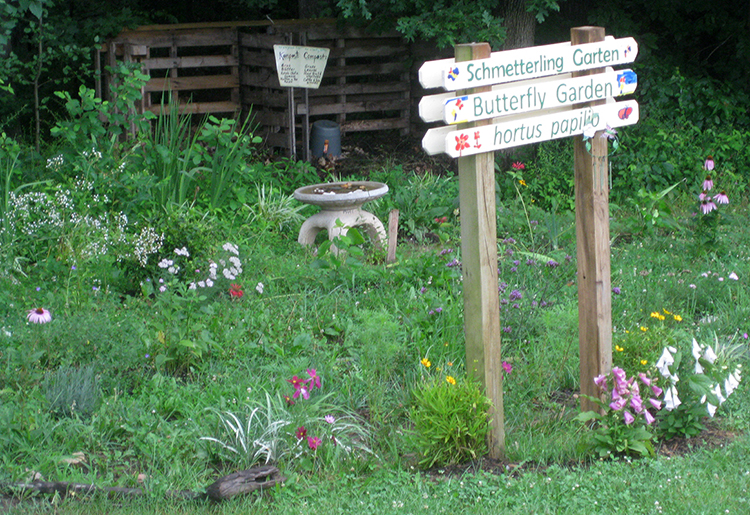 The Orange Hunt family has remained close knit over the years and many of our children today have parents who are Orange Hunt alumni. Orange Hunt’s staff have always been committed to providing our children with the best education possible; creating students who will one day become the positive, compassionate leaders of the next generation, because kindness grows where love shows. Looking around the Orange Hunt community, it is easy to see that love. 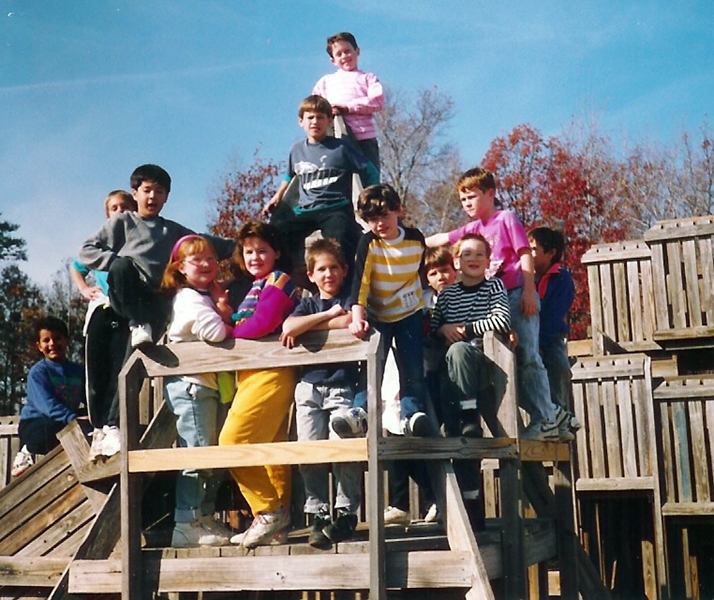 Orange Hunt Elementary School has had eight principals since our building opened in 1974.

What's in a Name?